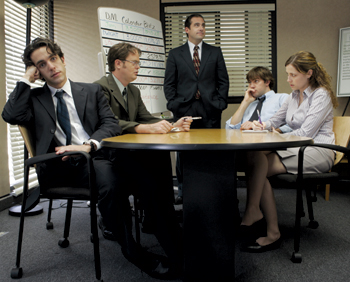 So, how do we make them better? Well, for starters we could make them shorter. Here’s a way to do that.

I’ve had two really good managers in my career (although I have no idea whether that means I’ve been blessed or cursed ;-) I learned different things from each of my managers – some of them pragmatic and some more in the “touchy-feely” category. This one is purely pragmatic (which is not to say that is all I learned from him, but those stories are for another day).

My manager (I’ll call him Mike, because that’s his name) set up this structure for a trading system project I was working on under his direction. We would have a status meeting on Monday mornings, which would set the agenda for the coming week, and with the following structure in place that meeting would typically take no more than 30 minutes. At the end, everybody knew what they needed to do, and we all got to work with a clear purpose.

In preparation for this meeting, each person would create a status report, which consisted of the following categories, no more and no less:

This is where you list the tasks that you planned to get done during the period, and that were actually completed. And, by completed we’re not talking about 90% – once a task gets into this category, you don’t expect to see it again – if you do, then it wasn’t really complete in the first place.

This sort of implies that tasks can be accomplished in one iteration, and so naturally forces you to think in terms of discrete quanta of accomplishment. To paraphrase Woody Allen, “A project is like a shark. It has to constantly move forward or it dies”.

Of course, in the real world things never go as smoothly as they are supposed to. (Another way of saying this is: “In theory there is no difference between theory and practice. In practice there is.”) So, this is where you list those items that came up “out of the blue”, but which you had to deal with. An example might be production problems, customer engagements, or other things that are unpredictable.

Planned and Not Accomplished

You would like this category to be empty much of the time, but that doesn’t always happen. Certain tasks may have dependencies on external agents over which you have no control, for instance – so even if you’re the world’s best planner, you’re going to get tasks in here from time to time. Typically you would also include a brief explanation of why something didn’t happen that was supposed to, which might feed into the “Issues for Management Attention” section later.

Planned for Next Period

Here’s where you discuss any “blockers” that are preventing you from accomplishing your goals. In many cases, this will include dependencies on external entities, and these provide an opportunity for your manager to exercise his or her persuasive powers on other parts of the organization.

And that’s it – just five categories, with a real focus on what’s truly important.

After learning this technique, I’ve used it with great success in all sorts of situations, and have also passed it along to others, who have all been quite happy with it. It strikes just the right balance between too much and too little information, and also focuses the information in a way that is most useful.

On Mike’s project, we had these meetings on Monday mornings, but Friday also works – that way you get it out of the way and come into the new week rarin’ to go.

If you’re a manager, give this a try and see if it doesn’t streamline one of your more onerous tasks. If you’re not a manager, then you probably have one, and you can suggest using this for your status reports. Or, you can just use this template to help you focus yourself on what you need to be doing.